The Gearing class Destroyer in a FRAM configuration allows for various usage of the ship to benefit and generate revenue to a museum. As can be seen by the  photos taken aboard our sister ship, USS Joseph P. Kennedy Jr DD 850, the sky is the limit for the educational and tourism benefit that these ships generate. 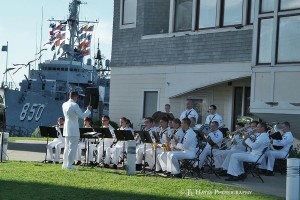 Veterans Ceremony-This photo show the usage of the Destroyer as a platform to host official city and state Memorial Services at various times of the year. The photo shows a US Navy band in front of the JPK during the 9/11 remembrance Ceremony that unites the local community. 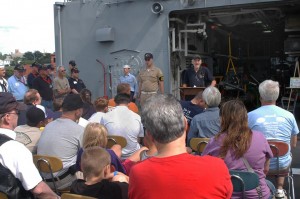 Veterans Ceremony- This is another photo to show the usage of the Destroyer as a platform to host official city and state Memorial Services at various times of the year.  This photo taken on the ship’s Flight deck, presents a Veterans Ceremony honoring the anniversary of the ships Decommissioning and success as a museum ship. However, this area is also utilized for Memorial Day, Veterans Day, and honoring of various veteran tributes. 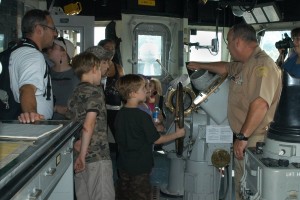 This photo reveals the tourism and educational benefit of a ship the size of a Destroyer. While small enough to effectively maintain, these ships are also large enough for visitors to explore and learn how these small towns of the sea operated. Intimate tours or self touring allows for the exploration and exposure to the fighting US Navy that put to sea during the Vietnam conflict. In this particular example, the Sea Cadet unit stationed aboard DD850 educates young visitors on the equipment and aspects of navigation in the ships Pilot House. 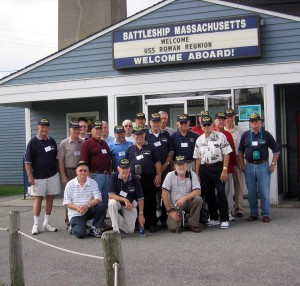 The multi-ship museum at Fall River draws sailors from WWII, Korea and Vietnam.  The KENNEDY especially attracts Vietnam sailors due to the critical role that Gearing Class Destroyers played in the Vietnam war and the fact that Vietnam era vets make up the majority of reunion attendees today. 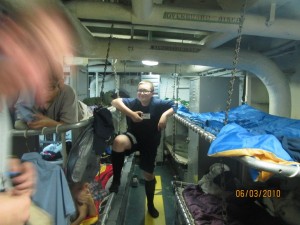 This photo reveals the real revenue generator that a Gearing Class Destroyer provides, which is overnight camping with over 300 bunks aboard and after following local fire ordinances, these ships have the ability to host over 100 scouts/night at anywhere between $30 -$ 60. The Mess decks/Galley area provide seating for at least 50 with the opportunity of food services being provided aboard the ship and on-board restrooms/showers. It is a very popular attraction and revenue generator for museums. 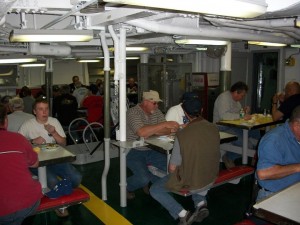 The Mess decks/Galley area provide seating for at least 50 with the opportunity of food services being provided aboard the ship and on-board restrooms/showers. It is a very popular attraction and revenue generator for museums. 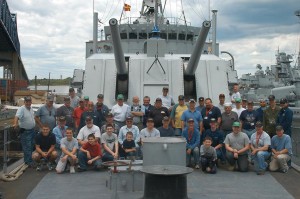 While not a revenue generator, the in-kind services provided by Tin Can Sailors and Destroyer volunteers is extremely valuable beyond calculation.  This group of dedicated ex-sailors live around the country and provide both financial and hands-on expertise to restore Destroyers. The last two photos show crew photos of volunteer crews aboard KENNEDY. They applied over 30 gallons of paint after preparing metal over a five day period. Along with painting, they do electrical, welding, plumbing, and other vocational skills to ensure their Tin Cans live another day. With the expertise of working on 850 for 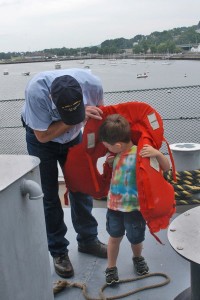 The Destroyer plays a very important role in teaching our children history and allowing them to experience what men did to protect our country during that time in our nations’s past. It is up to us to make sure our children are told! 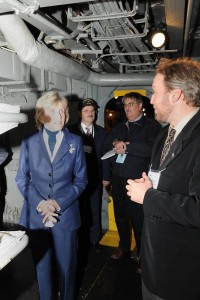 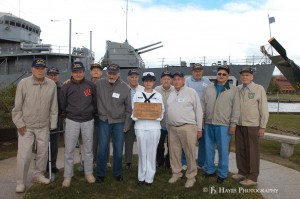 Cadets–The second photo reveals the community outreach to youth and the education that these ships can provide. Here the JPK Sea Cadet unit poses for a photo on her flight deck. This group utilizes the ship for training, education, participates in ceremonies, provide tours, and also support painting and other volunteer work programs. Local school groups, vocational high schools, and scouting units can also utilize this vessel for various community service and patriotic uses. By far the largest ship type that has reunions is Destroyer type vessels. Coupled with the National Destroyer Veterans Association (Tin Can Sailors) and individual ship reunion groups, this revenue generator provides a service to veterans while also hosting these large groups to generate tourism and local economic improvement. Typically, groups of 50 to 100 are common with 10-15 associations visiting KENNEDY just in the fall.