Over five thousand miles away in Asia, Turkish Navy crew and officers gathered at “Poyraz Pier” at the Naval Base in Golcuk/Kocaeli, Turkey on April 1, 1998. The sun was shining and the bright colors of flags stretched from the masts to the decks of a number of ships lined up next to each other. There were large numbers of Naval Officers and Crew in their dress uniforms, some with finely dressed women at their side. The whole sight was impressive. A canopy draped with flags was in front of two particular ships (TCG YUCETEPE D 345 and TCG ALCITEPE D-346) and halfway between was a table with nicely wrapped packages and caps. To the right and left of the table were podiums with microphones. To one side a large contingent of the Turkish Naval Band, poised for the ceremony to start. The guests were seated when a black shiny vehicle drove up to the canopy. Four Star Admiral Ilhami ERDIL emerged and with his wife approached the first row center of the guest viewing area. His place was prepared with a small table, his nameplate, bottled water and flowers. The Admiral acknowledged the first row that was comprised of all the prior Commanders of the two ships. Behind were other invited guests. The Admiral approached and extended his hand to Barb and me and thanked us for coming from America and expressed his honor at our visit. We exchanged that expression of honor for we truly felt it was an honor that was ours. 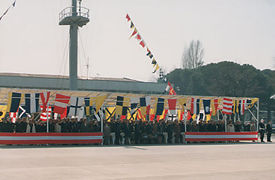 The ceremony and all that was said and sung was in Turkish. Although we did not know the language, we understood. Language could not mask the tremendously strong and affectionate feelings the people had for these two ships and especially for TCG YUCETEPE D 345. For the time had come when these ships, as beautiful, as operational and well maintained as they were, had reached “the end of their mission”. Her last CO, Commander ER, shared those sad words with me over dinner. The ship was almost fifty-four years old.

For TCG YUCETEPE, it all started in 1982 when the word came that it was time to retire USS ORLECK. She was not able to serve as the platform for the more sophisticated weaponry that the United States now had to deploy. She was still beautiful, in excellent condition and could still be of service to defend a dangerous world. Our NATO Ally, Turkey, showed interest in her.

It was this transfer to Turkey and the unbelievable additional 15 1/2 years she competently served Turkey that led to this April 1, 1998 decommissioning ceremony. It was this ship that had served both countries so well that now fostered a good will visit between peoples of two different cultures and has resulted in good close friendships having been developed between these peoples. It truly is a plus for international relations.

Through her years of service as a Turkish warship, there continued to be reports of excellent duty by the ship. Reports came from Turkey that in the last fleet exercise in June of 1997, which was a major sea exercise (C-Wolf 97), she recorded the best score among state-of-the-art frigates. Most of her time was spent in the Aegean and Mediterranean. She performed admirably with very accurate target hits during major naval gunfire support exercises and received a commendation from CinC Fleet. She was the leading ship during naval parades, on Turkish Victory Day of 30 August and in October 1997. In October 1997 the TCG YUCETEPE participated in a NATO exercise with French and Italian ships and her performance was excellent. The last report was that on Turkish Republic Proclamation Day, 29 October 1997, there was a big ceremony in the Bosphorus (black sea and Aegean). The TCG YUCETEPE with a Four Star Admiral aboard led an armada of 15 ships as they paraded along the coast. She fired 19 shots from her 5-inch guns as a salute to the Governor of Istanbul.

Shortly after the commissioning of three such frigates in N. Charleston, the word was received from Commander GURDENIZ that the decision had been made to decommission the TCG YUCETEPE. I asked for details and after the contacts were made in Turkey, I was told that the decision had been changed because the ship was in such good shape and would have its life extended. It took eleven days for the three newly commissioned ships to return to Turkey. However, on their arrival it was also learned by the Commander GURDENIZ that the decision had again been made to decommission the TCG YUCETEPE. This time it was really going to happen. He advised me that the “Admiral will be very pleased to see you in the ceremony. Please make your plans. I will arrange your accommodations here in Golcuk Naval Base and will arrange meetings with you and the Fleet Commander…” and others. “Tomorrow I will visit YUCETEPE in order to visit her the last time. It is so sad, however it is a fact.”

This invitation came out of the blue and while I wanted to attend, I could not believe that it could happen. Unlike others in our Association, I had never seen this ship and I knew it would be the last chance to see her as an active ship. I had always desired to be able to touch that ship and to walk on her deck, but it did not look good. It was less than two weeks away and I didn’t even have a current passport. Another communication from Turkey read in part, “I mentioned about the museum project to five Admirals and the last Commanding Officer. If you can come over here only thing you have to do is to come to Istanbul. The rest belongs to us. You will be picked up by official Navy Car with an Escort Officer to Golcuk. It will take two hours drive then you will be a guest of Turkish Navy. The last Commanding Officer will arrange an Istanbul tour for you after the ceremony. We will arrange your accommodations and transportation in Istanbul as well. I arranged a Protocol Dinner with Admirals for you so you can talk about your desire for the museum. We also arranged a lunch in the ship and a tour to the existing destroyer museum and many other places. So only thing you have to think is to fly to Istanbul and leave the rest to us. So, my friend it is life. The last Captain is doing his best to preserve the ship intact. Nothing left the ship yet and he prepares everything as if the ship will be a museum ship. It is important for you to come.”

We frantically worked and were able to put the trip together. Two Turkish Naval Officers picked us up at the airport. During our stay we were provided with a car and driver and a Naval Officer, Ensign Baris Yigitsoy as an Escort Officer. We were housed as guests of the Turkish Navy in accommodations reserved for Admirals. We were treated as dignitaries, received into the homes of our hosts and honored with wonderful meals and gifts.

Seeing the ship for the first time, many feelings flooded my mind. When I touched her side, tears flowed. It is hard to explain except for those who love their ship. To them it is very understandable. While I did not have the opportunity to see the ship when she was decommissioned in 1982, Barb had. She was the only woman to have attended both decommissioning ceremonies. The only other person to have been at both was Commander Baykan DILBEROGLU, the first Commanding Officer of TCG YUCETEPE D 345. While aboard our ship those last few hours of her active service, we enjoyed conversation with Commander ER in his stateroom over tea and cake. We were piped from the ship upon departing and that was a high point.

At the decommissioning ceremony, I was presented with a plaque that was made by taking the plaque that the United States had given Turkey on the commissioning of the ship in 1982, and using that to make a larger plaque. Upon presenting it to me, Admiral Erdil said, “It is a great honor to the people of Turkey for you to have come from America to be with us this day. What I am going to give you is something valuable to us and is of great historical significance. It is the plaque that the United States gave us upon the commissioning of the ship in 1982. We now present it to you.” It was inscribed at the bottom. “To Mr. Bob Orleck. Presented by Admiral Ilhami ERDIL, on the occasion of the decommissioning ceremony of TCG YUCETEPE 1.4.1998.” At a protocol dinner the evening of the decommissioning, I had the opportunity to speak to the officers and their wives at a special time through an interpreter.

The ceremony was sad. The music and the words were clearly spoken with heavy hearts. At the end of the ceremony men came from the ship and painted over the colors and she was taken from the pier by tugs in a symbolic removal from service. As she turned sideways facing the reviewing stand, her Commander Er took his hat off and waved good-bye. Then all her officers did the same. There was not a dry eye in the place.

This is a story of a ship that has served two countries. There are strong and fond feelings toward her that are hard to explain to someone who has not served on a ship. They loved their ship and they sent her off with such an appropriate good-bye. After experiencing the ship in the way I did, it is easy to see why the men who served in such a ship, loved her.

What is clear is that this ship, while just a hunk of metal, is special to so many people and has caused peoples of different continents to get to know each other and to bridge gaps. USS ORLECK has made her place in history and has been home to so many grateful men who considered her their friend and their home both in the United States of America and in Turkey.

God has blessed many of us through this ship in many ways, each different, each personal. We will never forget. Now she is returning home to be a museum. Never before in history has a ship served two countries and then returned to her place of birth to honor the men who served in her in both countries. USS ORLECK, we salute you! 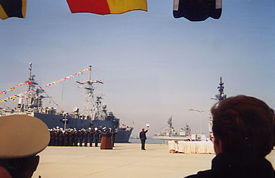