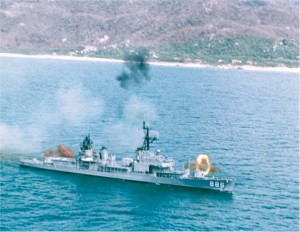 I am not certain how many of you know or know of Richard (Rich) Angelini.  First of all, he is a young man who is the nephew of USS ORLECK sailor Gary Angelini (October 1972-March 73).   Rich is also a Trustee on the Board of Directors of Battleship Cove in Fall River, MA (where Destroyer USS ORLECK Association did a great reunion dinner aboard the USS Massachusetts Battleship during our 2010 Newport, RI reunion and toured his ship the USS KENNEDY DD 850).  He is also one of the main catalysts behind the restoration of the KENNEDY, a Gearing Class Destroyer and sister-ship to  ORLECK.  I will take this introduction one step further and state that I believe without exception he is the foremost expert on Gearing Class destroyers in the world and is such a friend to them.  He is responsible in the DD 850 of helping to preserve the sights, sounds and memories of that time.

I just received the following  US Navy Destroyer related videos to DD850s YouTube page from him.   Rich reviewed and posted it on his website and sent it onto me.  In his review he did so with great detail trying to look into the ships.  This is what he had to report:  “The exciting part is that I am stating that the ship gun fire support sequence at video point 0:59 and then again at 9:50 is no ship other than ORLECK. The video shows her at her best firing on enemy positions with a view of her from onboard and from the air. Looks like the Navy planned to document her here as the famous color photo of her firing on the Viet Cong is from this sequence.”

You can leave comments below.